Brian Burk has become a beacon of hope for those with autism as he crashes through barriers on American Ninja Warrior, tearing down obstacles and stereotypes along the way!

If you haven’t heard of Brian Burk and his success on the hit television show American Ninja yet, then what’s stopping you! This exciting rookie has smashed his way through the Los Angeles Qualifiers and is on the road to success. It’s not just his ability that is winning him fans either. It’s also the sense of joy and pure happiness he shows as he tackles and overcomes each of the obstacles in his way. 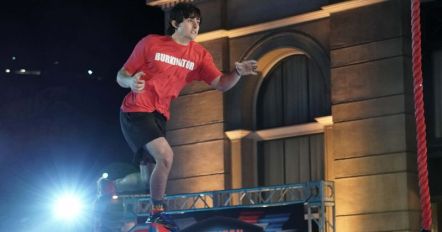 During the Los Angeles City Finals, Brian made a complete dash almost to the end of the obstacle course, only falling from the ninth obstacle, the Leaps of Faith. It was this run that put him ninth on the leaderboards overall, cementing his place in the National Finals.

For Brian Ninja Warrior is much more than just a way to stay fit or a competition. Ninja Warrior is how he connects with the world around him. Brian was diagnosed with high-functioning autism. Brian’s parents have expressed how proud and overjoyed they are at seeing their son truly express himself on the show.

Brian is setting a positive example and showing the world and those with autism that there is no obstacle too big if you have a positive attitude and willpower to see something through.

Social media was buzzing as Brian smashed his way through the Ninja Warrior obstacles.

“I’ve always loved American Ninja Warrior, but tonight I raised the bar as I watched a young man with Autism race #ImNotCryingYoureCrying #DifferentNotLess,” wrote one fan on Twitter.

“Never say someone with #Autism can’t do anything they put their mind to. I saw on American Ninja Warrior tonight and other times before the total opposite. Just because someone has a disability doesn’t mean they are not smart and talented.” Twitter fan said.

“First, we see a kid with Autism in America’s Got Talent give the world a ray of hope it needs. And one day later a kid with Autism beat the American Ninja Warrior course. SIMPLY AMAZING! Dream big folks”, said another fan.