A Middle School Student with Autism Has Been Given a Desk In a Bathroom!

An eleven-year-old student in Bellingham, Washington, has been given a desk over a toilet in a bathroom.

11-year-old Lucas is the first to admit that he does work better in a quiet location but was traumatized to discover that the spot chosen for him at school was a desk in a bathroom over a toilet. 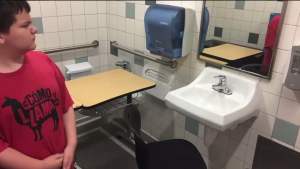 The school was first alerted that one of their children, 11-year-old Lucas, had special needs and did better in a quiet location. Despite this requirement, Lucas was horrified that the school’s solution was to place his desk over a toilet in a bathroom.

“I was like how is this happening. How am I in the bathroom? Why?” said Lucas.

To make matters worse, Lukas’ teacher also supplied him with a camping mat so that he would be able to nap on the bathroom floor if he got tired.

His mother Danielle was so upset that she took a photo of the horrified expression on her son’s face at discovering that he was expected to learn and study in a bathroom.

“I was so shocked. I just took the picture because I didn’t believe what I was seeing,” Danielle recalled.

Lucas is autistic and also has an autoimmune disorder. Lukas’ mother spoke with his teacher and asked him if there was another location for his desk but was told no.

“It’s not an appropriate place for anyone. But especially for Lucas who, with his Pandas condition, can’t be around germs. That’s something that can really affect his body,” Danielle said.

It’s no surprise that the entire experience has soured Lukas against the school and has said that he doesn’t want to return.

A school district spokeswoman says the desk was set up last weekend and also noted when contacted that space was an ongoing issue at the school.